Sunday morning, fifty cyclists and twenty local young volunteers gathered in Panatau for the 5th edition of the annual bicycle race. The race is organized by Asociatia de Ajutor AMURTEL, with the support of the Local Council and funded by Buzau County Council. It was a beautiful, sunny autumn morning with bright blue skies and golden leaves on the trees. Excitement buzzed as the participants signed up, receiving t-shirts and granola bars, gathering with bicycles at the “START” line painted on the street. There were two routes for the race – for the younger children, the race ended at the Local Council building – about 2 km, whereas the older, athletic kids and adults had a more challenging track, 5 km almost all uphill, to the Tegu village!

The bicycle race is now one of the annual traditions in the village, attracting all ages and skill levels, from five to forty-five and over, including several participants from Asociatia Club Sportiv Penteleu. The winner of the 20-30 yr old category, Cristian Radu rode all the way from Ploiesti, won the race climbing a steady uphill at 40+ km/ hr from Panatau to Tega, and then planned to continue towards Sinaia together with some others he met at the event! Most of the participants were from the local community and parents, grandparents and friends gathered to cheer them on, as well. In total, there were at least 100 people present!

Particularly proud to participate, were several children from AMURTEL’s own Children’s Home “AMURTEL Family”! According to the president, Denise Deshaies, “Last year, when I came to Panatau the day before the race, I asked the children if they would be participating the next day. When they said that they didn’t have bicycles (or the ones they had were broken), I was so disappointed. I told the story to some friends, and that I really wished that we could help Santa Claus to bring bicycles to them for Christmas. The next week, a brand new bicycle arrived by courier! By Christmas, many sponsors and friends got involved, and all of the ten children had a very, very big surprise waiting for them! Since then, they have been practicing and practicing until our front lawn has become a compacted dirt race track.” Indeed, four of the children from Familia AMURTEL received prizes in the race, including three girls! 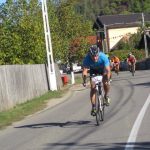 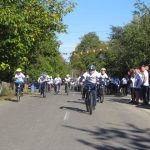 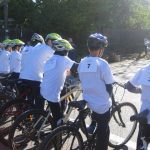 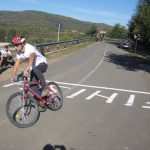 The winners of the race, by age category, were:

The mayor, Nicolae Stoica, has plans to continue to enhance the event next year, closing off a circuit just for the race for the day, and perhaps inviting musicians or other entertainment.

Those interested in volunteering opportunities or in supporting the children from Asociația de Ajutor AMURTEL are welcome to contact Denise Deshaies, president of the association.