While the pandemic has generated substantial stress and uncertainty, it is to be expected that such situations will trigger the traumas of children placed in residential care homes such as AMURTEL Family, who come from backgrounds of neglect and abuse.

It has been universally difficult even for mature, healthy adults to deal with this unexpected situation, so it is understandable that it will have a greater impact on those who have already experienced traumatic stress and have lower thresholds.  The team working with the AMURTEL Family children immediately began discussing proactive ways to reduce this impact.

Then, in April, a few weeks into the initial lockdown phase in Romania, just days before Easter Sunday, an important holiday in the local Romanian Orthodox tradition, the AMURTEL Family home received governmental orders that all residential care homes around the country must enter into a preventative quarantine.  Indeed, from a public health point of view, the logic was very clear.

Residential care, in which workers come from many different families exponentially multiples the level of exposure for beneficiaries – and also for coworkers.  One infection can spread easily to the entire community, and leave the home without sufficient supervision.  Already the children had been staying mostly within the courtyard of AMURTEL Family since the lockdown began, but now nobody would be allowed in or out of the home, and the caregivers had to work 14 day shifts, without returning to their families.  This went on for a full 35 days!

Positivity and reframing as a vacation!

Thanks to the very positive leadership and personal example of the home’s local director, Mirela Birla,  the whole caregiving staff took it in an extremely positive way. She announced to them “I have packed my bag for a 2 week vacation!”  They worked very closely together keeping the children and themselves as busy as possible so that the time would pass quickly and easily.  Their amazing positive attitude and unity was fundamental. Had they been feeling depressed, frustrated, angry or negative, this would have quickly transmitted to the children. 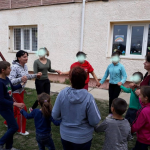 As mentioned earlier, although we were expecting the children to be more triggered and manifesting perhaps increased aggression, or withdrawal – to our great surprise, going through a collective hardship with positive, balanced adults had an unexpected positive impact.  The whole context seems to have created more unity, and brought out empathic qualities!  It seemed that the children were truly touched and inspired by the sacrifice they witnessed of their caregivers, who had to be separated from their families on the Easter holiday and during their birthdays to be with them.

All the extra attention that they got has strengthened their relationships shifting the values towards thinking about collective welfare and protecting the vulnerable, instead of short-term self-interest.

A beautiful demonstration of this shift was when one of the usually rebellious, and somewhat difficult boys prepared a poster for greeting the next incoming shift of caregivers.  He knew that one of them had initially been so upset when she heard about having to stay for two weeks without going home that she burst into tears.

So, when she and the others arrived the first morning, they were greeted by a sign on the front gate that said = “Welcome! Don’t be afraid! We will be cooperative and understanding 🙂” 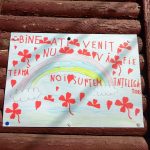 This lovely heart-warming action showed an emerging sensitivity to the feelings of others, that is so crucial for overcoming difficult times together. Indeed, the solidarity,  open discussions about feelings and emotional support provided by meaningful relationships helped equip the children with lots of resources for going through this experience in a resilient way that seems to have minimized triggering of traumas. Or perhaps it gave a new experience that going through difficulty does not necessarily have to be traumatic when surrounded by loving, supportive people and using the occasion to strengthen relationships.

Another key to the positive atmosphere was to keep the kids really actively engaged in lots of interesting activities. The Bucharest team worked hard to keep them supplied with care-packages full of craft supplies, activity ideas, seeds and flower bulbs, good quality DVDs, books, recipes. 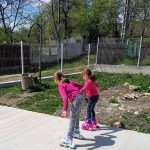 A supporter offered some second-hand rollerblades which turned out to be a huge hit with the children and soon more were donated, keeping them busy for days as they practiced balancing and gliding on the skates.

Indeed, as the home is in a rural area and enjoys a really spacious outdoor play area, well equipped with swings, a trampoline, gardens, paved areas for bicycling and skating, a sandbox, and lots of space for running and playing, the children were actually quite privileged in this regard, compared to children that were confined to apartment flats. 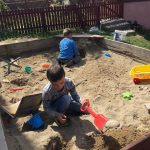 They also had the additional advantage of having plenty of other children to socialize with.  These two factors helped improve their resiliency and reduce the stress of the situation substantially.

Another activity designed to both for encouraging creative expression, but also for being able to offer thanks to their wonderful caregivers, were the talent shows organized by the kids, at the end of each 14 day shift.  There was an air of excitement as the kids prepared their big secret surprise for their beloved caregivers.  They entertained them with singing, dancing and some very beautiful and sincere expressions of thanks which brought tears to the eyes of their caregivers and lots of joy to everyone involved! 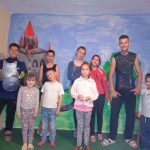 Another factor for resiliency is to focus not only on getting your needs met – but to try to find ways to give to others and to express gratitude.  When children experience the joy of giving, it shifts them out of the powerless role of the victim, into an active, impactful role. Indeed, when Didi sent care-packages she always included a hand-written note and encouraged the children to write back.  They were so excited when she would read out their handwritten notes on a video message back to them, letting them know that they had really made her feel so happy to get their message.

It was also important to share scientific, accurate and trustworthy information to both the caregivers and the children.   While protecting them as much as possible from sensationalist media, everyone had to also be well-prepared to answer their questions with accurate information.   The team also found songs and dances about Corona and about handwashing that helped bring humor into the situation, another important factor for resiliency.

The children were also very concerned about their dear sponsors, especially the ones in countries that they knew were gravely affected by the pandemic.  They often asked about them, and we made sure to transmit messages back and forth between the sponsors and the children.  More than ever, the children experienced feeling connected to a larger global family and we were so grateful for the support from so many sources – whether thoughtful text messages or videos, or the unexpected surprise of second-hand roller blades,  there was so much to be thankful for!  Find out more how to join our community of support here.

So in the end, thanks to the caregiving team that decided to manage the situation so positively, the hardship of the quarantine actually built up so much more strength in both the team and the children than anyone could have ever imagined!

Now while the children were of course children, and not perfect angels the entire time, all things considered, they really did admirably well. Naturally, in the final few days as the quarantine approached an end, understandable impatience starting building in anticipation for the freedom to go for a walk or bicycle ride in the nearby wide open orchards and fields. Once summer vacation came, they were so happy to go to the nearby river to swim, take long walks and bicycle rides, and play soccer, enjoying the beautiful nature in the surrounding village more than ever before.