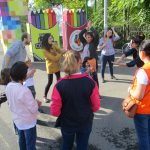 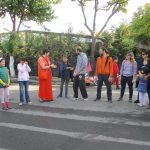 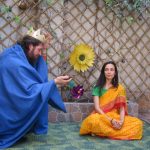 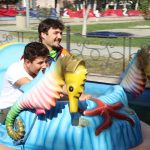 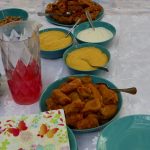 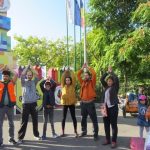 The children of AMURTEL Family, together with three Italian guests and about twenty other friends enjoyed such a beautiful and warm day for our first Play Day in the big city!

Breaking the Ice with Samurai Games!

Everybody gathered at the entrance of the “Children’s World” park and we started with some group games to “break the ice”,  get to know each other better and to warm up for the fun to come!

While in the circle we also wished Ion a very happy birthday, we sang and played together. Everybody then walked to the big playground in the center of the park, and enjoyed all the slides, tunnels, swings, boats and games for a few more hours. It was a great opportunity for sponsors and friends to bond with the kids in a fun way.

Sarmale at the kindergarten

We walked back to Rasarit Kindergarten for lunch, where a few more friends joined, so we did some more games in a circle and then ate “sarmale,” a cabbage roll stuffed with rice and soy meat,  the ubiquitous traditional Romanian party food.  The sarmale had made a trip all the way from Panatau where the team there prepared them with lots of love (the best spice, they were delicious)  🙂

Afterward we had a short theater presentation – very quickly improvised by our three talented Italian guests – Devarainjan, Gayatrii and Miirabai,  narrated by Didi. Mihaela kindly helped with the translation of the story of “Madalasa” – a yogi queen who gave spiritual guidance to her young children, inspiring them to become great sages already from an early age to the distress of the king, who wanted an heir.

We ended the Play Day with the celebration of Ion’s birthday – he was so surprised to receive exactly what he had been wishing for – a remote control car, boots, and a book. It was a very touching moment for everyone present, as Ion was clearly overwhelmed with the attention he received. He was somewhat frozen when he got the presents, especially because they were wrapped, and he was afraid at first to ruin the paper. He tried very delicately to unwrap them, and he got visibly distressed and apologetic when the paper tore.  But, when we encouraged him and told him it was OK to tear the paper, it was no problem with the second gift. Now he was an expert, and he tore away with glee.

He was also so surprised to have his wishes fulfilled that he was forgetting to say thank you – until his older sister Alina came up and whispered in his ear. He didn’t get it the first time she whispered, so she had to repeat the subtle intervention. He is not used to being in the limelight, so all the attention was visibly embarrassing for him, as he usually hides himself in the group.

We’d like to thank again everyone who was involved for yet another fun-filled and joyful Play Day and the kids are already looking forward to the next one in May!

In the meantime, to provide the children of AMURTEL Family a safe home, good meals and help in their education and development, you can find out how to become a sponsor by clicking the green button below.